FYI, this is the longest time I have ever spent in Nicaragua—six weeks now.  AND I love it here.

Last week I finally got hooked to the internet so that I can now email from my house and print on my WiFi printer.  This also means that my MagicJack phone connection works now.  My phone number is 916 222-6241.  Please remember that there is a two hour time difference and I may not be at home when you call.  There is a voicemail connected with MagicJack.  If you don’t reach me, try to leave a message and I can pick it up through the computer connection.

This past month I have made a little progress toward beginning my Programa Cuidadores de Personas.  I visited the director of SILAIS—the Nicaraguan Health Dept.—in Tola who wrote a letter introducing me to the Department of Rivas Director of SILAIS.  Both of these kind individuals decided that I didn’t need permission from SILAIS to begin the program.  They also thought this was a good idea.  Now the last person I have to meet is the Alcaldia/Mayor of Tola to let him know what I want to do and see if there is anything I need before undertaking a proper beginning.  Incidentally Tola is akin to our county in the US and the Departments are like the States in the US.  I live in Limón Dos, Tola, Rivas.

There are a couple of interesting things going on here in my compound.  One was the internet tower which is 72’  that was a riot of watching.  Three IBW individuals—the internet company—arrived at 11:30 pm–yes, I mean 11:30 pm–, two men and one young woman who spoke a few words of English.  I received a call at 5:30 pm from her saying they were coming from Rivas, a one hour drive.  At 9:30 pm, I went to bed and was sound asleep when they arrived.  So out I went in my shorty pjs and flip flops.  Needless to say the commotion in the backyard with us out there created pandemonium with the dogs, kids and adults who weren’t sound asleep as yet.  In addition to this late arrival, I must also mention that the pump to our well was broken and there was no water.  Pandemonium lasted until about 12:30 am when the only folks up were the IBW 3 and me.  Since the task at hand was to dig four holes for placement of the tower and the guidewires and concrete the holding devices in place, it required making concrete.  Concrete making requires water.  The young woman rigged a pulley over the well and bucketed water out while I held the flashlight so we could both see where the bucket was.  Meanwhile the men are measuring the spots to put the holes and then digging in this rock infested dirt.  Rocks in W. Sacramento are small river rocks.  Rocks here are volcanic and can run from small to table size.   For the next two hours four batches of concrete were made from the materials in the back of their pickup truck.  I was now holding my large flashlight through the bedroom window to add light so that more than one project could be happening at the same time.  At 2:30 am, the process was over.  The three IBW folk laid out a tarp and a lounge chair pad outside and went to sleep under my bedroom window.  I at least had my bed.

At 6:00 am everyone was up and ready to go again, including me.   The next event was cutting branches from the two tall trees that would interfere with the guidewires.  Sr. Juan Guzmán, the pardron of the compound age 67, tied his machete to his waist and climbed up the trees like a monkey and chopped the allocated branches.  At one point the wind was so strong, he tied himself along with the machete around his waist to a branch.  As each large branch fell there were shouts from the kids and a scramble for the fruit of the one tree that is like a nut.  The IBW crew was picking these up too.  After all the branches were cleared, the woman donned a long sleeved shirt, tied back a bandana and sunglasses, and she was the one putting these 8’ sections of the tower in place as the guys hoisted them up with the same pulley she had used for the well project.  I have to tell you that not only was the wind at one of the worst days for velocity but that it was also hotter than hades that day.  After about two hours, the woman had lost her strength and the youngest man changed places with her putting up the last 8’ section.

I don’t know what time they left since I had a lunch date with some friends from Rancho Santana and left the compound at noon.

One week to the day later, another crew came out and put the antenna on top of the tower and then drilled a hole into my bedroom window casing for the wiring.  This crew was also very accommodating and ran the wire where I wanted it—up along the ceiling and through the piece of furniture that is really a buffet but acts as a storage area in my bedroom—and currently is my office.  It all works well.  The router is connected to a server at RS so I can call them for help if service goes down.  So far so good and I can now print documents and scan to send, as well as use my MagicJack.

I have been studying my Spanish for at least an hour each morning and it is improving poco a poco.  No doubt my daughter Rivka would still laugh at me but I am getting fewer weird looks from the family members here as I speak to them.  No English spoken by all in the compound except Lidieth.

There are so many things that I could write about but I would prefer to stop here and send along some photos again of the two worlds and how it looks from my new home.

PS.  I do have to mention that I am putting pedal to the metal to get enough money to build on my lot in Guascate.  The view from there is outrageously beautiful and although I’m sure there is dirt there too, it can’t be as bad as living here on the dirt road with the wind.  I think I eat a pound of grit a week without trying.

The photos are:  Please ignore the date stamp on the photos 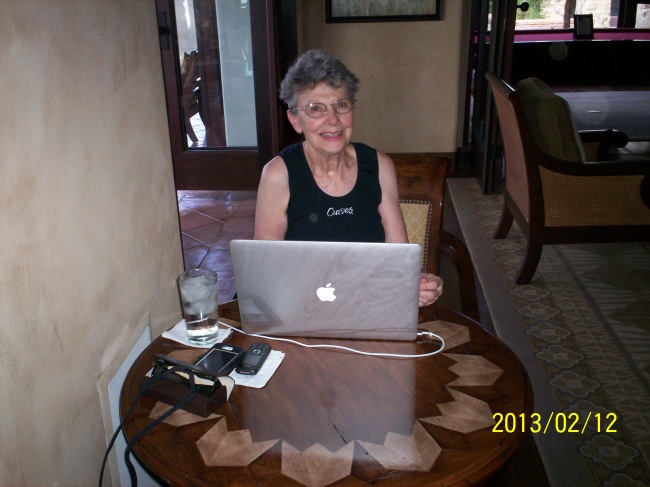 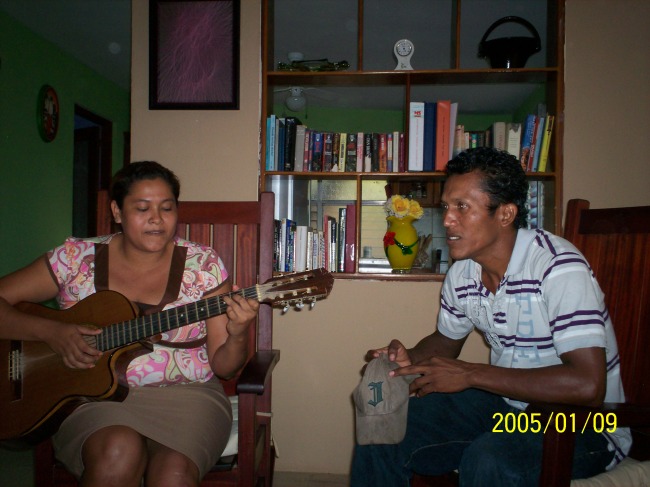 My car and me in the back of my house before the internet tower.

Me before my own internet at Rancho Santana clubhouse.

Sr. Juan Guzmán feeding a baby parakeet that was one of seven from an abandoned nest up in the mountain.  He currently has nine parakeets/chocoyos that he is feeding until they can fly away on their own.  The one in the photo didn’t even have its eyes open yet.

A typical sunset from RS.